Pulled apart an N-scale loco and passenger car for parts.... 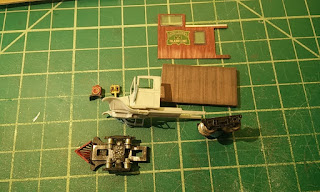 Railcar and a Sidetrack

Two little projects on my workbench: the railcar kitbash and a luggage cart. 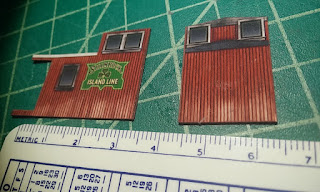 I've only gotten this far, but it's a start.

Then I discovered an article written by John Allen on how to build a luggage cart, and I decided to modify his design a little and try my hand at it. 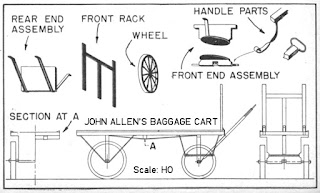 Here's my progress so far on a card model version. I've added an extra rack to the back, per some prototypes, along with lettering on the side. Allen's wheels were acetate with the spokes drawn on; I decided to cut the spokes out, add rims and wrap a paper band around the outside. 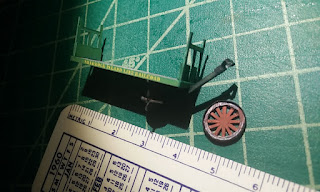 I decided my next project should be an HOn30 whimsical railcar. (It'll just be stationary.) I'm kitbashing together the following three things:

Here's my mockup, just to get some of the sizes and proportions the way I want them. 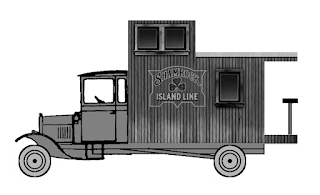 I always like to use bogus train line names, and "Shamrock" has been a recurring word in my work, so I made a new logo for the Shamrock Island Line. (After all, it's not the REAL Rock Island Line!) 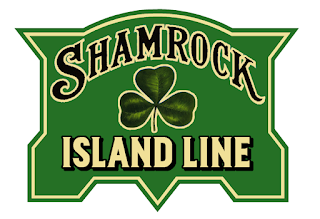 Here are some of my other bogus signs and logos... 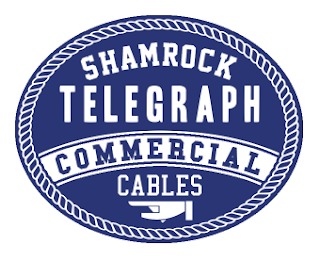 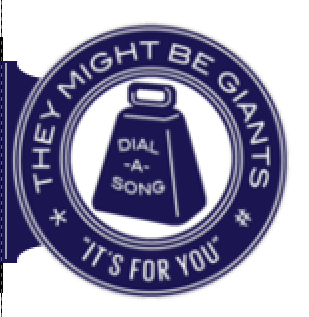 My take on the old AT&T logo. 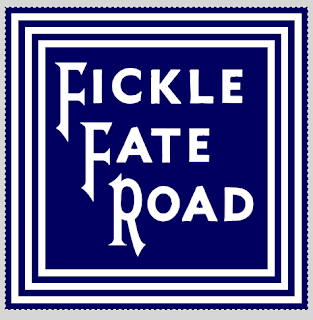 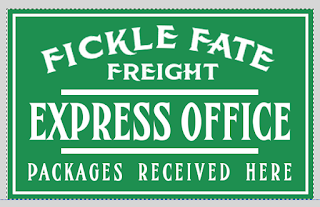 Obviously based on the Nickle Plate Road logo... 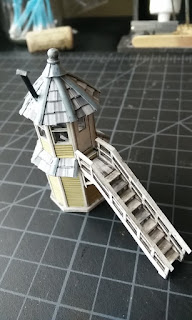 It came out a little cattywumpus, which is actually kind of charming. There are a couple design problems with the engineering of the kit, the worst of which is: the upper level doesn't really connect with the lower in a proper, structural way... it attaches to the lower shingles, while the lower level attaches to the underside of the shingles at a different point. The floor of the upper level is held above the lower by the shingles, with a gap of around 5 or 6 scale inches between the two. The gap should have been hidden by the top landing, but I built the stairs quite a while ago, using a different printer, so I think it's a little smaller than it should be. Anyway, I hid the gap with a bit of clapboard from a second printout.
Posted by Dan at 3:05 PM 1 comment:

I am 5/8ths done with the upper tower walls and windows. 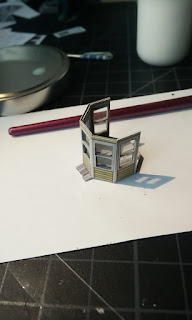 Here's what I have so far, roughly balanced together in order to see if I've screwed anything up. 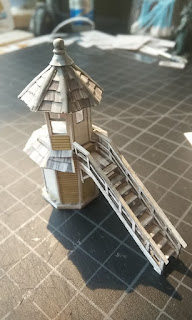 My original plan was to light the inside, but at this point, that's too much of a hassle. I did sandwich a layer of black cardstock between the outer and inner surfaces, so if I do light it later, the light won't shine through the walls.
Posted by Dan at 2:18 PM No comments:

I'm finally getting around to finishing my build of Clever Models' Octagonal Gateman's Tower. 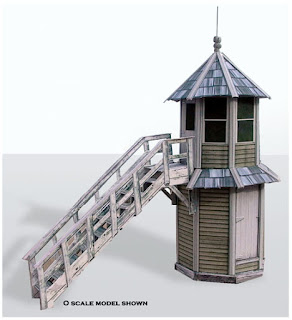 I've had the stairs done and sitting around for a long time now; I guess it's time to finish the durn fool thing. 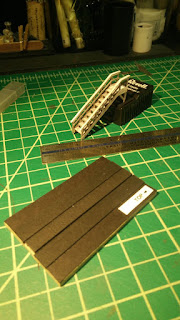 The project of the last couple days was making the lever which operates the gates. After Googling around, I found the following image showing the proportions of the lever. 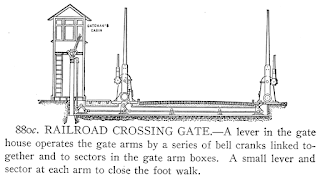 I zoomed in on just the tower, and in GIMP, I pasted the cropped image below over the Clever PDF, sizing it to get it to match the size of the upper room.

From that, I was able to get my measurements. My first attempt was made from black cardstock, which looked all wrong. Then I took some stiff wire intended for earring and jewelry making, along with the foil cap from a wine bottle, and made this: 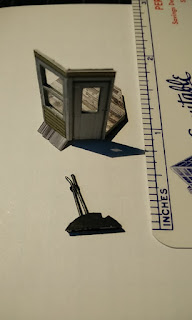 I assembled the whole thing with CA glue, and wrapped the top and bottom with a thin strip of the wine foil cap, and added a drop of black acrylic paint to the tips of the levers to resemble the rounded ends of the handles. I think that's about as close as I can get to the prototype, given the supplies I had on hand.

Putting clear windows in this beast at HO scale is very difficult indeed; I'm getting quite a bit of squeezeout from the CA glue, but I've decided it's pretty minor, given the scale, and it looks a bit like cobwebs. Cobwebs, yeah, sure, that's the ticket!

I'll probably make the roof removable if I decide I can't see the details through the windows.
Posted by Dan at 8:44 AM 2 comments:

I came across this odd billboard on a Portland history blog the other day... 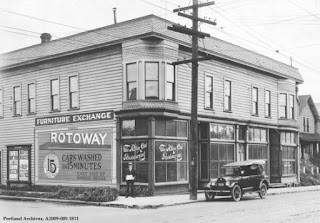 It's got a typical 1920s billboard frame, but that frame is simply painted onto the shiplap on the building. Naturally, I wanted to make one to put on a model building someday, so here's my take on it, dropped onto a Clever Models white shiplap background. 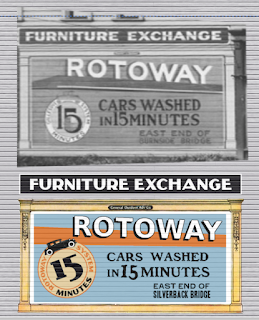 For reference, I used the perspective tool in GIMP to straighten out the photo. I took the frame from a print ad for billboards, and fooled around with fonts to get a fair approximation of the original. (I swiped the colors from that print ad, too.) I altered the circle quite a bit by using different fonts, then rotated it a bit to jazz the design up a little. Once I had everything nailed down the way I wanted it, I used some of my GIMP tricks to make the sign appear to be recently painted on the Clever texture.

After I finished, I zoomed in on a higher resolution version of the original, and realized the original graphic designer put a clock face in the bottom of the 15, with fifteen minutes of the hour highlighted.

By the way, about the lettering for "FURNITURE EXCHANGE"; I just spent about $30 for "Show Biz JNL" by Jeff Levine. I'd been hunting for that font for quite a while, and there's no freebie version of anything close to it. It's a really good approximation of "Bulletin Board Thick and Thin Letters" as seen in The Expert Sign Painter, and variations on this typeface turn up in a lot of signage from that era. 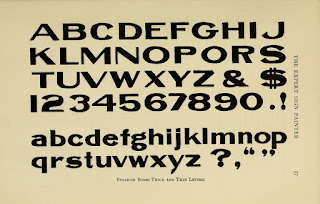 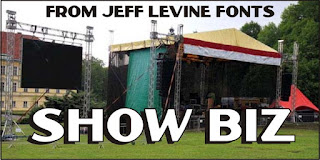 UPDATE: Looking closely at more of the pictures on the Vintage Portland blog, I see that these flat billboard frames were a thing... in Portland, at least; I've never run into them before... 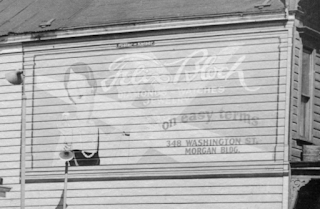 Also, while looking for images of workers putting up billboards, I came across a Jam Handy film on Archive.org, To Market, To Market, which was very boring, but had a LOT of information about period billboards. 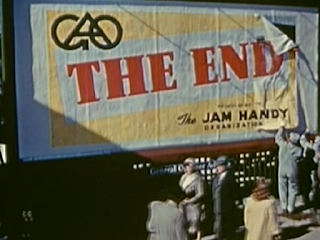